Orignal and curated news, advice and insight on business to business marketing. 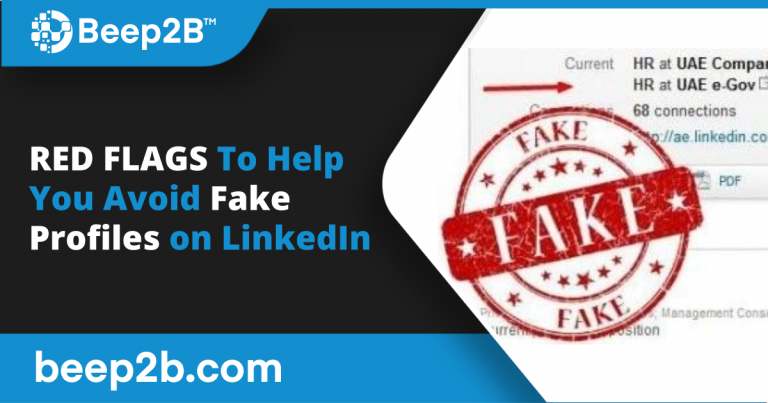 In today’s world we are all aware of the power of social media platforms to help elevate our brand. As the largest professional businessing network in the world, LinkedIn is of course no exception to this. Unfortunately the growth of the platform has also meant that it represents a larger potential pool of valuable information and intelligence for online fraudsters as more and more business is conducted via the site.

As more and more people are making use of professional networks like LinkedIn to engage with other professionals, online awareness of scammers and how they operate has also grown. Unfortunately this means that the sophistication and determination of scammers on the platform has also increased.

In order to gain access to valuable information about you and your business – with which they can run phishing scams and other malicious attacks – scammers will create profiles and attempt to connect with you. To do this then often simply modify details from genuine profiles and attach a professional profile photo in order to create the appearance of genuine and respectable users. It is increasingly difficult to identify these profiles, as scammers take more and more care to make their fake profiles look convincing and legitimate.

However, it is crucial that you know how best to spot these impostors: as a professional you need to make sure the integrity of your businesses information is protected at all times and just one successful phishing attack – or another similar scam – will seriously compromise this.

So, take a look at the five red flags we have outlined below to help give you some initial pointers when trying to discover fake and malicious profiles on LinkedIn and help you to protect the integrity of your business.

1. Poor use of English

Although this doesn’t necessarily indicate malicious intent  – it could just be a sign of a regrettable lack of care – it is certainly a red flag. Bear in mind that many scammers view their attacks as a ‘numbers game’. They will often create countless fake profiles and see which of them are successful. Given this fact, the effort they put into any individual fake account can often be quite low and this will show in details like poor spelling and grammar.

In general you should be trying to connect with other users who present a competent and professional image on the platform. If someone sends you a connection request from a profile that is riddled with incorrect spelling and grammar, aside from being an indication of potential fraud, it might be a reason not to connect with them anyway.

Another red flag, which is related to this one, is if a profile is only half-completed. Again, this by no means indicates that the profile is definitely fraudulent. However, as with poor spelling and grammar, it certainly indicates a general lack of care which at the very least should make you think twice about connecting with someone regardless. When examining a profile’s information to determine if it is genuine you should also pay attention to things like overly vague job titles and generally ambiguous information. This could well indicate that the profile isn’t genuine as the scammer will not want to associate the profile too closely with any existing business or narrow professional niche as this could make it easier to discover.

2. The Profile Does Not Engage with Others

One of the main purposes of LinkedIn is to allow professionals on the platform to connect and engage with one another. A lack of engagement on the site could just indicate that the user is not making the best use of LinkedIn or else that they are simply too busy to do so. However it might also be a sign that an account is a temporary scam account which is used solely to attack other users

A scammer, using multiple different fraudulent profiles will probably not have the time or inclination to work on the content or engagement of a single fake account. If someone sends you a connection request from an account that displays a lack of content or engagement with others then this is certainly a red flag that should cause you to look at the accounts other activities and connections in order to determine whether or not it might belong to a scammer.

This one is a definite indication of fraud and you should never connect with a profile whose picture you believe to be fake! With modern technology, however, it is becoming increasingly difficult to detect this and some scammers will even use special software to generate entirely fake human faces that are completely indistinguishable from real people.

As with the other red flags mentioned in this article, you can also make use of other indications to help you decide whether or not the profile in question is genuine. For example, if some of your other trusted connections are also connected with the suspect profile this helps indicate that the profile is legitimate. However it should never be taken as definitive proof – as your other connections may simply have been taken in themselves!

This is perhaps more subtle than the other red flags in this list. Instead of trying to gain access to your profile and then extract information from it that can then be used to run other scams on you – this approach usually runs the scam directly on LinkedIn.

When trying to connect and engage on LinkedIn, these accounts will attempt to entice other users with the promise of fantastic – and often unrealistic – job opportunities and business offers. If you fall for this you will then be sent a link to an external site which will usually ask you to input sensitive personal information – do not EVER do this! There is no reason, for example, that you should be giving your social security number or bank details to a stranger on the internet and the only possible explanation is that they would request it is if they are trying to defraud you.

As with so many of the tactics used by scammers on the platform, perhaps the worst thing about this is that it discredits genuine opportunities that can be found on the site and thus makes it harder to trust anyone on the platform. LinkedIn certainly can still be used to find fantastic new job opportunities. Just make sure that you use appropriate caution at all times and never give your personal or financial details to someone you don’t know and trust to be genuine or who doesn’t have a legitimate and necessary reason to be asking for them.

5. The Profile Doesn’t Have Many Other Connections

This is perhaps a bit of an unfortunate reason for an account to raise red flags with other users. After all, it could just be that an individual is just getting started on the platform and is genuinely trying to build up their network. However, a lack of connections – especially if the user has only a few dozen or less – is a serious red flag. When you suspect an account might be fraudulent due to their lack of connections you should make sure to have a look at the users with whom they are connected. Often you will find that these connections, in turn, look suspicious in one way or another and may raise additional red flags to you.

As with the other potential indicators of fraud already mentioned in this article, the main thing that a lack of connections should cause you to do is to look more closely at the profile in question. There may be a good reason that the account is lacking in connections – for example a young professional who has just left college is likely to have far fewer connections than a seasoned business person with many years of experience. Use your common sense and do your due diligence on such accounts to ensure they pass the ‘smell test’ before connecting with them.

Most of these ‘red flags’ – aside from a fake profile photo – are not definitive proof that an account is not genuine. However if you notice any of them, this should be sufficient to cause you to pay closer attention before accepting any connection requests or engaging further with the suspect account.

As always use your common sense, if you believe there is even a chance that an account might not be genuine is it even worth connecting with it? One potential indication of fraud by itself, may just indicate a non-optimal use of LinkedIn. However if an account displays many indications that it might be fraudulent you should certainly avoid connecting with it. It is probably better to play it safe anyway – after all why would you want to associate yourself with someone whose account looks potentially fraudulent, even if this is simply due to a major lack of care on their part?

Stay alert and aware when interacting with unknown users on LinkedIn and make sure that your information is not compromised unnecessarily by looking out for these red flags in the future!

“If you are looking to tap into the vast community of LinkedIn to grow your business, I highly recommend that you save yourself a great deal of time and frustration by choosing the hands-down best solution in the market.”